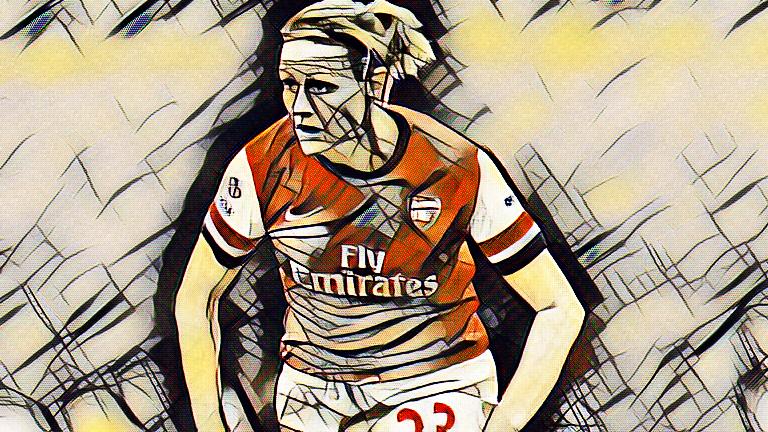 As a football fan, you would have to have been living under a rock for the last fifteen to twenty years, to have not heard of Kelly Smith – England women’s first world superstar.

Where did it all begin?

Growing up in Watford, Smith was a huge football fan from an early age. She regularly played on boys’ teams until the age of seven, until she was forced out of the Garston Boys Club – despite Kelly being the top scorer – after the parents of opposition clubs complained about her involvement in the team. With that, she went on to join Pinner Girls, a team formed by her father.

Smith continued her development at Wembley Ladies and went on to make her senior debut in the 94-95 season. When Kelly was just 16-years-old, Pete Davies of The Independent, wrote:

During the 96-97 season, Smith moved to Arsenal Ladies. The striker played a crucial role in helping the Gunners win the Premier League that season, scoring two goals and assisting another in a 3-0 win over Liverpool. During that season, Kelly attended West Herts College in Watford, before then deciding to transfer to Seton Hall University in America in 1997.

University in the US

Smith enrolled at Seton Hall University as a student-athlete. It did not take long for her to start breaking records, as she became the first athlete in any sport to become the Big East Conference’s Offensive Player of the Year and Newcomer of the Year in the same season, setting scoring records in the process.

Over the next two seasons, Kelly was named Offensive Player of the Year for both campaigns and was not just the top scorer in the Big East Conference, but the entire NCAA Division 1. Following the end of Smith’s time at Seton Hall, she became the first non-Basketball player in the University’s history to have her number 6 shirt retired, after scoring a remarkable 76 goals in just 51 games.

Beginning of Professional Career in the US

In 1999, the forward joined New Jersey Lady Stallions of the W-League, where she spent one season. Kelly decided to stay on in the US and be part of the new women’s division that was being formed in the country. Before the league officially began, Smith was drafted second in the Foreign Allocation Draft by the Philadelphia Charge.

Unfortunately, her time in Philadelphia is where her injuries began. Kelly had a fantastic opening season with the Charge and her form was rewarded after she was named in the 2001 WUSA Global XI All-Star Team. Sadly, that was the only full season Smith played a full part in for the US side after she tore her ACL during her second year, which kept her out of action for most of that campaign and the one after.

In 2004, the WUSA folded, but Smith stayed on in the US for the next few months. She rejoined the W-League with New Jersey Wildcats, but injury struck again, with the striker breaking her leg. In Kelly’s eight games with the Wildcats, she registered eight goals and six assists.

The road to Arsenal legendary status

Smith returned to England with Arsenal in 2004, following a battle with depression and a drinking problem – but that did not stop Kelly from going on to write her name in Gunners folklore.

Despite being sidelined with yet another injury, this time a stress fracture – Smith returned at the end of the season and scored a long-range, title-winning screamer against Charlton. This goal set a marker for what Kelly could provide for the Gunners and laid down the foundations for what would be a huge following season.

In the 06-07 campaign, Arsenal went on to win a staggering quadruple of trophies. That season could arguably be the best season of Smith’s career after she scored 30 goals in 34 matches for the North Londoners, which resulted in her being named the FA Women’s Players’ Player of the Year.

Smith went on to play for the Gunners for a further two seasons. During this spell with the club, she scored 73 goals in the Premier League, as well as 13 in the FA Cup, four in the League Cup, nine in the UEFA Women’s Cup and one in the Community Shield. Her last game for the club was an FA Women’s Premier League Cup final against Doncaster Belles, where she scored a hat-trick, to take her goal record to 100 in 112 appearances for Arsenal.

In 2008, she was appointed as an MBE at the Queen’s Birthday Honours – a reward for her exceptional career and service to women’s football.

Return to the US

Smith decided to leave the Gunners and join the new Women’s Professional Soccer League in 2009, where she was drafted second by the Boston Breakers in the WPS International Draft.

Unfortunately, Kelly was once again hit by injuries in the 2011 season, leading to her playing just ten matches, scoring once and setting up four. At the end of the season, Smith was left without a club.

A Gunner once more

Despite receiving offers from a host of European clubs, Kelly was only interested in signing for one club, Arsenal. During her third spell with the club, Smith took on a coaching role and helped the team more off the pitch than on it.

Despite her involvement being limited, Kelly still managed to be shortlisted for the 2015 Women’s PFA Player’s Player of the Year award aged 36 – a testament to the great talent she was.

Just three days after her 17th birthday in 1995, Smith made her England debut against Italy in a 1-1 draw and was named Player of the Match. It did not take long for her to notch her first England goal, which came in her second appearance for her country against Croatia.

Smith missed out on a number of caps while she was at University in the USA, as Seton Hall refused to release her for international duty, which could have led to her having several more caps than she did.

However, whenever she was available for selection, Kelly was always the first name on the team sheet. She went on to compete in the 2001, 2005 and 2009 UEFA Women’s Championships, as well as the 2007 and 2011 Women’s World Cups. In addition, she also played in the 2007 China Cup and was named the player of the tournament. Smith was named in the top-five of the Women’s World Player of the Year awards three times, with third place being her highest.

In 2010, Smith registered her 41st goal for her country, which meant she surpassed Karen Walker as England’s record goalscorer. In 2015, Kelly announced her international retirement, after scoring 46 goals in 117 matches for the Lionesses.

Alongside her superb England career, Smith was named in the first ever Great Britain women’s squad for the 2012 London Olympic Games, where she played in a memorable game versus Brazil at Wembley in front of a record crowd of 75,000.

What did her colleagues say about her?

“Kelly is one of those players who come along only once or twice in a lifetime. In the men’s game, you’d think of Diego Maradona or Messi, players with a unique talent, and that’s what Kelly has.”

“Kelly is one of the best players in the world and someone who inspired me throughout my career. Without doubt, women’s football wouldn’t be where it is today without her contribution. England were very lucky to have her and I was extremely proud to play alongside her.”

“Kelly, to me, is a player that changed any game. Whether she started or came off the bench, you knew that a goal was coming.

“She is a great talent and a great inspiration, especially for young players. She takes the time out to encourage young playersg and I am sure she will go on to play an important role in the continued development of women’s football.”

She was an Arsenal legend, an England legend, and a footballing legend. Kelly Smith – the game changer.