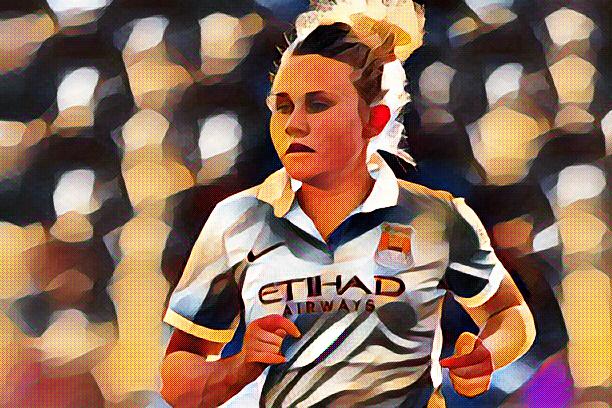 The way Isobel ‘Izzy’ Christiansen has developed and taken English football by storm over the last 18 months you would think she would be satisfied with her standing in the game and current level of performance. For Manchester City Women and England however, the best is still to come.

Born in Macclesfield, Christiansen began her youth career at Everton and impressed sufficiently enough to break into the first team at the age of 17, playing in central midfield. At the time, Everton were regulars in the Champions League and so Christiansen was exposed to European football at an early age. Being able to test herself against some of the best players in the world was a blessing and it was quickly noted how comfortable she looked amongst her peers.

Her exposure meant that after only a year of first team football, Birmingham City Ladies were willing to take her from Everton. She went from strength to strength in the Midlands as she gained more Champions League experience and also managed to get herself some silverware as Birmingham won the FA Cup in 2012. A memorable moment on the way to the final for Christiansen was in the 5th round where she scored an audacious effort from 35 yards out.

In 2014, she signed for current team Manchester City Women and her time there has seen her mature into one of the most talented midfielders in WSL history. Assured in possession and always aware of her surroundings, Christiansen’s use of the ball is fantastic. She often finds herself involved in the attacking third and this has helped her become a high scoring midfielder.

Signs of what was to come were apparent in her first year with the Citizens when Izzy helped the team make history; it was her goal against holders Arsenal in the Continental Cup Final that won Manchester City Women the first trophy in their history. In what has now become a regular occurrence, Christiansen arrived late into the box from midfield and nodded in a cross with an emphatic header.

The following year, Christiansen got her first England cap and has now gone on to get 21 caps so far with 5 goals, including a goal on her debut against Estonia.

Last season was Izzy’s real breakout year and she drove her team on to a domestic double as they won the WSL 1 title as well as the WSL Cup. City also got to the semi finals of the Champions League. Christiansen was recognised and rewarded for her efforts as she was named in the WSL Team of the Year and received the PFA Woman’s Player’s Player of the Year award.

With City top of the table at the time of writing this season and having just signed a new contract with City this year, Izzy Christiansen will be hungrier than ever to dominate for many more years.