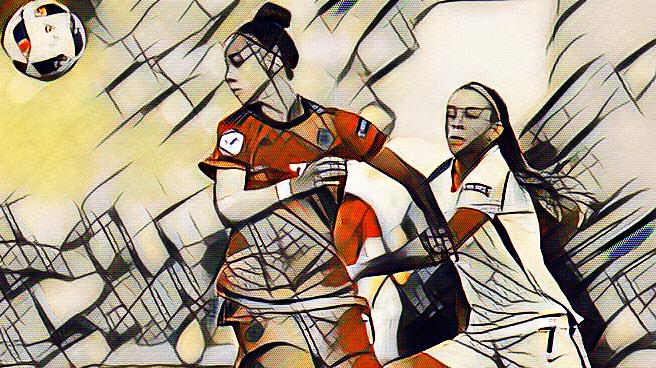 SC Freiburg remains in the shadows of the big two in the Frauen Bundesliga; VfL Wolfsburg and Bayern Munich. But there is an 18-year-old midfielder creating a huge wave for Freiburg and ensuring that the name of Freiburg starts to be included in the conversation of the biggest clubs in German football. This is only Giulia Gwinn’s third season in top level football but she has already made a huge impact and still has so many more levels to go.

The creative midfielder is the youngest of four children with three older brothers and it was through her brothers that Gwinn caught the football bug. Gwinn was active in a host of other sports such as Handball and Taekwondo but wanting to be like her brothers led to her going down the football route. She started playing football for her hometown club at eight years of age before working her way up the youth pyramid; joining VfB Friedrichshafen and then SV Weingarten. At the latter two clubs, Gwinn found herself playing and starring for the boy’s teams; building a buzz for her talents.

Her performances in youth tournaments all around the country meant that several Bundesliga clubs had already taken notice and wanted to sign her. After a thorough decision process, Gwinn decided to choose a club that was located not too far from her home in SC Freiburg. She joined for the 2015/2016 Frauen Bundesliga season and the 16 year old made her debut not long after signing. Gwinn made her first start for the club after 10 games and since then she hasn’t looked back; becoming a first team regular.

Her ability to dribble and find space in the attacking third of the pitch at such a tender age has led to so much excitement from her club. This season has seen her go from strength to strength as Freiburg try to overhaul Bayern and Wolfsburg at the top of the Bundesliga. In fact, her efforts led to Freiburg inflicting leaders Wolfsburg with their only defeat so far this season. It was Gwinn’s early effort that gave her side the win. Gwinn has added goals to her game this season and is currently the 5th top scorer in the league with 6 goals, all from midfield.

Gwinn’s next target will be to start playing for the German national team. She has already given herself the best opportunity to be called up with her performances for the German youth sides. She was part of the U17s squad that won the European Championships in 2016 and was her country’s best player in the U17 squad’s World Cup campaign in which they went out in quarter finals. Gwinn scored in all three group games, one of those goals being a wonderful free kick which was named as one of the goals of the tournament.

Her positive attitude and determination are already clear to see in the way she plays the game; she is versatile and willing to play anywhere across the midfield or up front. As she continues to gain experience and progress, her enthusiasm will definitely take her right to the top.