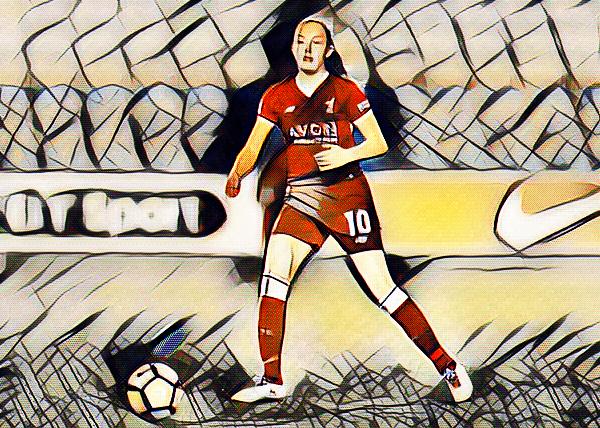 Caroline Weir was always playing football as a child; she played in the football team of her primary school throughout her time there, standing out as being the only girl on the team. Her father noticed that she was a lot more talented than most in the school team and sought an academy for his daughter to further enhance her talents.

At ten years old, Weir signed for Hibernian Ladies and remained at the club for six years. Her dad eventually got involved with the running of Hibernian Ladies and he contributed to creating a fruitful pathway from the Hibernian youth team into the senior squad. Weir’s scintillating form for the reserve team, where the midfielder was named First Division Player of the Year, allowed her to take advantage of the pathway and make her first team debut for The Hibs when she was 15.

The Scotswoman went on to make 40 appearances for Hibernian, getting 21 goals for the club. During that time she also managed to get her first cap for Scotland and her rise meant that there was interest from across the border. Shelley Kerr, who was an ex Scotland coach, was in charge of Arsenal Ladies and she moved quickly to secure Weir’s signature. Her two years at Arsenal were tough, as she became homesick as it was her first time being away from home. It also wasn’t made easier with the fact that Weir was more of a backup player in the squad. One huge positive for her was that she got her first piece of silverware when Arsenal won the 2013/2014 Women’s FA Cup.

Willie Kirk, who was the manager who gave Weir her first team debut at Hibernian, had just been hired at Bristol City Women and one of his first plans of action was to sign Weir from Arsenal in the middle of the 2015/2016 season. The young midfielder started the final 8 league games of the season for Bristol and made a huge impression on the squad with her creative talents, unfortunately, she and Kirk couldn’t arrest Bristol’s slide and they were relegated at the end of that season.

Weir was quickly snapped up by Liverpool Ladies and from then until now, she has matured into one of the best midfielders in the league. She is the creative hub of her team and she also chips in with the odd goal. She has made more appearances than anyone for Liverpool this season and with six goals, she is her team’s second top scorer. In her first season at the club she was named Player of the Year.

On the international stage, Weir has also been creating headlines. She was named Scotland Player of the Year in 2016 after making an incredible positive contribution in getting Scotland to qualify for Euro 2017, which was their first ever major tournament. She just recently got to half a century of caps for Scotland and being that she is only 22, it is likely she will go on to receive a record number of caps.