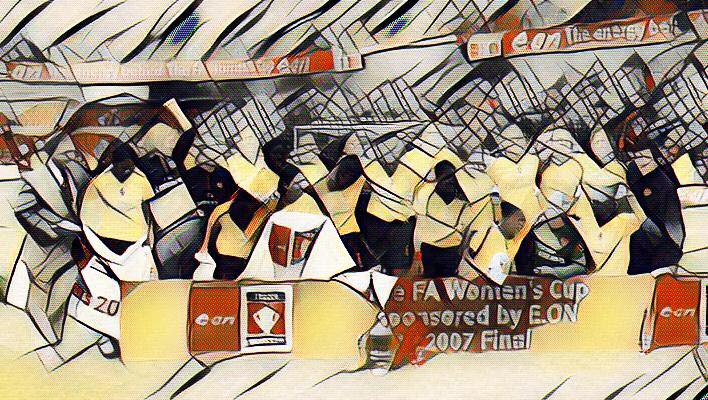 Well, it’s the international break this week so to take place of my usual Arsenal Women’s match report, I thought I’d share how I first got into women’s football.

Even now there isn’t near as much women’s football being televised compared to the men’s game, but just over ten years ago there was even less. For me, even access to men’s football was slightly more limited than others without sky so I was quite reliant in BBC and ITV.

Thankfully, as well as Match of the Day and Champions League nights, there was also one domestic game that would always get coverage on BBC. The F.A. Cup final. The earlier rounds would do too of course, but the finals are always much more important.

However, before we got to the men’s final in the 2006-07 season which was to be the first at the New Wembley, there was a final which was more interesting to me to be seen. This was because instead of Chelsea vs Manchester United, as an Arsenal fan from South East London, a game between then-Arsenal Ladies and Charlton Athletic Women was far more appealing.

As an eight-year-old at the time who hadn’t been seen the women’s game I didn’t really have any expectation for what I was about to see. Luckily for me though, the Arsenal side I was about to watch were in complete dominance at the time.

This was very much shown in the first 90 minutes of women’s football I would watch. Despite going down a goal within the first couple of minutes of the game, Arsenal responded in a fashion that probably couldn’t be matched by our current men’s team after that loss against Brighton on the weekend.

The side who were coming to the end of their 20th season ended up as 4-1 winners. With the game being almost 11 years ago I can’t recall everything that happened during the match but there are two moments that are very hard to forget.

Even though we went on to score four goals in the game, we had just two goal scorers on the day. Kelly Smith and Jayne Ludlow. In the first-half of the game both players would score very memorable goals as Smith hit a well-struck free-kick to equalise before Ludlow added another goal from outside the box into the top corner which had replay after replay after replay.

A year after watching the men’s team lose in the Champions League final to Barcelona it was nice to see an Arsenal side lift some silverware. But at the time I didn’t understand just how successful that 2006-07 Arsenal Ladies team were.

When both the men’s and women’s seasons came to an end as a Junior Gunner I received a ‘gift box’ of sorts. Along with the usual stationary and other stuff there was a dvd reviewing the Arsenal women’s season. Unlike the men’s team who were just getting used to The Emirates that season, they had run riot.

However, the dvd didn’t just help me realise the team’s success but who was actually in the team. Emma Byrne in goal, Alex Scott who is now becoming well known as a pundit and Faye White in defence to the more attacking players like Rachel Yankey there was quality, but there was one player that I connected to more than others was striker, Lianne Sanderson.

Other than scoring repeatedly it was also brought to my attention that she was from my area and that her parents lived just a road over from my dad. In a time where footballers of any kind seemed worlds away this was something that was quite a big deal once I’d found out and made me feel that bit more connected to the club. With this and the fact that I had walked past her on the road (as a kid I might’ve been too nervous to approach a footballer on the road) I took a higher interest in the women’s game around that time.

Unfortunately though, after that year’s Women’s World Cup I’ve only casually kept up with women’s football, mostly watching major tournaments and the occasion Arsenal match. But hopefully, writing for this site I can gain a better knowledge of women’s football and keep up the interest which I first found in that 2007 F.A. Women’s Cup final.