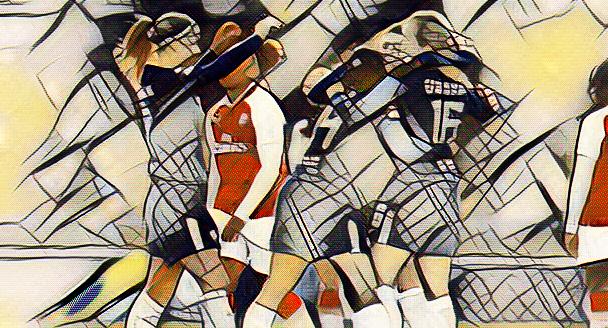 The Chelsea men’s team may be the reigning champions of England, but it is their unbeaten female counterparts that are currently stealing all of the positive headlines.

Chelsea Ladies are top of the WSL 1, having won eight and drawn three of their 11 matches – conceding just six times in the process. The men’s team is having a hard time emulating their triumphs of last season as they currently sit in fifth place and are five points outside of the Champions League spots.

They have been notoriously known for failing to live up to expectations in the season after winning the Premier League title, which appears to be happening again this year. Antonio Conte is struggling to get the best out of his players at the moment, with the season hinging on the FA Cup and Champions League, where they face the daunting prospect of needing a result away to Barcelona to remain in the European competition.

Meanwhile, the Blues’ ladies side has gone from strength to strength in recent years, ever since their first WSL title in 2015. Since then, the team finished runners-up in 2016 and they were once again crowned champions last year – in the first spring edition of WSL 1 (known as the Spring Series). Now sitting two points clear at the top – they are definitely in with a chance of going one better than the men, by securing back-to-back titles.

Granted, there is a little bit less pressure on the women’s team, but they are currently on course for an even better season than what they produced last year. Perhaps, as the women’s league continues to grow at a rapid pace, the pressure may begin to tell on their performance output in future seasons but, for now, it seems to be having no negative effect whatsoever.

Emma Hayes’ players have definitely bought into their manager’s methods, proving so on the pitch over the last couple of seasons. The key to that could be continuity. Hayes has been at the club since 2012 and, while several players have come and gone over the years, the foundations of the club are firmly set in place. She knows what she wants from her players and they know what they must deliver on the pitch. Maybe this mentality is not there for the men’s team?

This is just Antonio Conte’s second season in charge and following their current plight down the table, many believe he will not be there next season. Therefore, if that is to be the case – where is the continuity? The men’s team maybe need to take a leaf out of the women team’s book and stick by their manager for a longer period of time, to pave the way for more prolonged success in the future.

So, which multi-million-pound player is it that’s leading the way on the scoring front for Chelsea? It’s none of them. It is, in fact, Fran Kirby, who is having an excellent season and deserves recognition for her performances. The striker is a huge reason behind the Blues Ladies fortunes this season, as she has registered a hugely impressive 14 goals in just 13 league starts.

Let’s compare Kirby’s stats to the men’s forwards. In all competitions, Alvaro Morata, who was bought for over £60m in the summer, has chipped in with just 12 goals in 36 appearances. Mitchy Batshuayi’s performances were deemed not good enough and he was shipped out on loan, while Olivier Giroud has scored once in his five games for the club. None of them come close to Kirby’s impressive season – that is for sure.

There is still a number of games left for both Chelsea teams to play this season but, at the moment in time, the ladies side are certainly flying the flag for the Blues.